You are here: Home / Advocacy / Assignment of Benefits–Restoration Association of Florida?
Share this article

Google “fronting organizations” and you’ll find a variety of definitions and examples.

Wiktionary says a fronting organization is one that “…secretly acts as the public face of a covert group.”  Wikipedia says it’s “…any entity set up by and controlled by another organization”.  Examples are intelligence agencies, organized crime groups, banned organizations, religious groups, political groups,  corporations, and… “advocacy groups”.

One association in the political fight over Assignment of Benefits (AOB) is an “advocacy group” called the Restoration Association of Florida (RAF). It’s a non-profit lobbying organization with the mission to “…protect the rights of the independent contractor specializing in water, fire and mold restoration.”

Since lawmakers always like to know who is speaking for whom, I thought I’d do some digging and share my excavations (some relevant, others not so much) regarding the charge that RAF is a front for trial lawyers.

While there may be no connection, RAF emerged after a board member (and spokesman) for the Florida Association of Restoration Specialists (FLARS) publicly repudiated the use of AOB’s stating he did so because of “the unethical practices of…hundreds of plumbers, roofers and contractors…” with whom he “…didn’t want to be associated…”  (See NOTE #1 below)

Some believe it was a decline in FLARS efficacy that triggered the founding of RAF in 2016.  When I asked an RAF representative the difference between FLARS and RAF, I was told RAF had a more singular focus on AOB.  Indeed RAF, in my opinion, has publicly overshadowed FLARS with articles, op-eds, legislative testimony and more—most of which sound to me more like a trial attorney than, say, a “dry out” contractor.  (See NOTE #3 below)

The RAF website reveals several nuggets supportive of the fronting charge, including this: as of 4:30PM on 2/24/19 RAF had only 40 members—that’s 40 out of thousands of contractors, remediators, both licensed and unlicensed, across the state of Florida.  And, nine of them were trial lawyers! On 3/9/19 RAF’s website showed 42 members, 12 of which, or about 28%, were trial law firms.

This angle, the “how many total members compared to how many are trial lawyers” angle, takes on greater relevance when you consider that some RAF members appear to not be remediation “contractors” at all.

One of RAF’s 40 members, for example,  is a graphics company.  The link provided to its website didn’t work but I googled it and guess what—the words “contractor” or “remediation” don’t appear anywhere on its site.  But…there was plenty about its graphics capability.  We do  “…everything from A to Z to meet your marketing printing, design, bindery and mailing needs.” Nothing, about remediating damaged homes.  Why would a graphics company join RAF?  I don’t know but, the low-end of the dues spectrum is only $25 a month, so maybe they just wanted to sell more signs and could care less about AOB.  Just sayin’.

Here’s another tidbit. RAF’s corporate filings show the name Dave DeBlander.    You may remember Mr. DeBlander from my rebuttal of his Op-ed in the Pensacola News Journal (See David & Goliath).  In DeBlanders’ opinion piece, he accused the Florida Chamber of Commerce of being a front for the insurance industry when he called it a “lapdog” for insurers.  (See NOTE #5 below)

When I emailed Mr. DeBlander about his RAF membership and status as an officer/founder I asked several questions to which he responded… “Although I am a member, I don’t know a lot of what goes on. I’ve never been to a meeting or event although I have been on some conference calls. I do not know the answer to any of your questions.”  Again, DeBlander is not only an RAF member but he’s identified on RAF’s Corporate Annual Report and is a prominent figure during legislative testimony in Tallahassee.  Sounds like he may have very little to do with RAF.

Yet another of RAF’s 40 members is similarly situated.  It’s a local franchise owner for remediation firm Serv Pro.  When I contacted its owner, he explained that he was not aware of RAF’s primary focus to defend the use of Assignment of Benefits and that neither his franchise or its corporate home office endorses the use of Assignment of Benefits.  He also said he pays only $25 a month in membership dues.

RAF has several dues categories listed which range from a very thrifty $25 a month to a very sporty $1,000 a month.  So, it’s important to know who pays how much to know how much each group influences RAF’s messaging. Clearly just about anyone might be willing to pay $25–even those that don’t support RAF goals on AOB  or those who just want to sell more signs.  But how many would pay $1,000 a month?  (See RAF membership Categories here).

One of the questions Mr. DeBlander couldn’t answer  was how many of RAF’s members are in its highest dues paying category of $1,000 per month and how many of those were trial lawyers?

Think about it.  If all the non-trial lawyer members of RAF choose to pay only $25 a month then the maximum monthly income from dues is only around $750 or about $9,000 a year.  Where does the rest of the money needed to pay a lobbyist and run an association come from?  Maybe from those in the highest dues category.  If they are all trial lawyers that’s another data point in favor of the “fronting” argument as it yields approximately $108,000 annually.

Of course, sponsorships and non-dues contributions can also help the budget.  Consider the Facebook picture below of RAF President, Richie Kidwell taken at a fund-raising event for Senator Gary Farmer, a trial lawyer and former president of the trial lawyers lobbying organization, the Florida Justice Association. The caption on RAF’s Facebook page reads: RAF President Richie Kidwell stopped by the Happy Hour Fundraiser for Senator Gary Farmer last night hosted by Cohen Law Group. It was a great night of donating & mingling! Thanks Cohen Law Group! 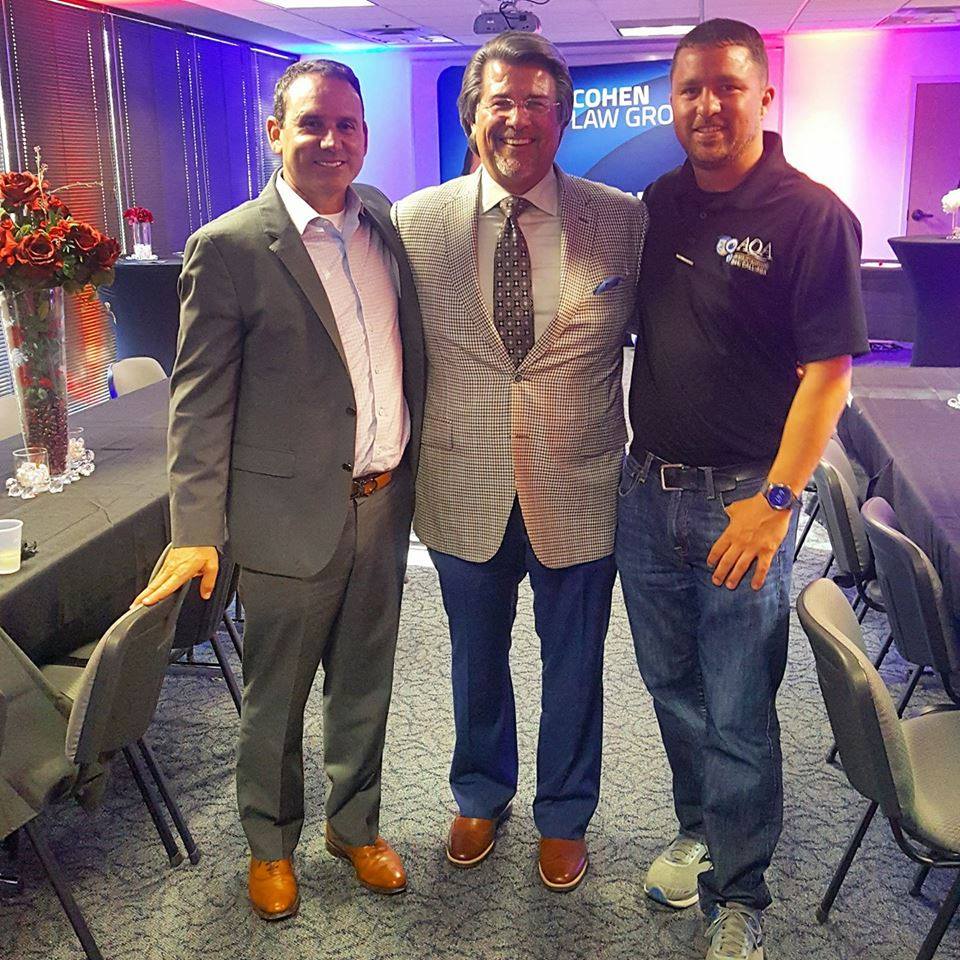 RAF’s Facebook page shows events sponsored by attorneys, but…the truth is I really don’t know who pays what to RAF or what its non-dues income may be. But I do know this: if 28% of an advocacy groups members are not in the trade or profession it purports to represent and they are providing the bulk of its revenue, whether from dues or sponsorships, that entity is open to the charge of being a  fronting organization.

I should also make it clear that, while the term “fronting organization” sounds a bit unsavory to some, to my knowledge they aren’t illegal per se or even unethical under normal circumstances, particularly advocacy groups.  (See NOTE #5 below)

But, that’s not the point.  The point is, Florida lawmakers should know whether messaging on an issue comes from those the association claims to represent or from someone else that lobbies the same issues via another advocacy group, like the Florida Justice Association for trial lawyers (See Senator Farmer Still Lobbying for Trial Bar).  As always in matters such as these, and in the interest of helping lawmakers hear all sides, I promise to print any response RAF wishes to provide, and to do so without any edits what-so-ever.  I’m only after the truth.

Finally, don’t trust me on any of this. After all, it’s just my opinion. Do your own due diligence. Follow the links. Research it. Google it. Let me know what you think.

Hopefully this article will help you make up your own mind.

NOTE #1: The timeline is operative in forming this opinion.  FLARS was formed in 2013. It’s spokesman repudiated AOB in 2015.  RAF was formed in 2016. In a blog I wrote in 2015 following a legislative panel on which I participated, I describe how the spokesman for FLARS repudiated the use of AOB in a blog titled “AOB…the ‘Tipping Point; is here!”.

NOTE #3:  To me it seems that, as the legislative debate increasingly looked at Florida’s one-way attorney fee statute (via proposals like HB-7015 and SB-122), vendors have increasingly opined on matters outside their usual focus, such as: Civil Remedy Notices (CRN’s), insurer bad faith, and other issues that can distract from the issue at hand.  RAF has also displayed disproportional success in getting its articles and op-eds published, in my opinion. Many read as though they were inspired, written and even brought to the media by the work of one or more trial lawyers. Following are some examples partially responsible for my opinion. For more on trial lawyers and the politics of AOB see “The Politics of AOB.”

Carriers Can Solve AOB Crisis  This op-ed was written by Richard Diaz.  According to the article he is “a board member of the RAF and president of Cutler Cleaning and Restoration” a “restoration company specializing in restoring household items damaged by smoke, water or mold.”  It was curious to me that it referred to “household items” instead of clothes. My research did not reveal a company named Cutler Cleaning and Restoration. It revealed a company named Cutler Dry Cleaners and Clothing Restoration, which appears to be a Dry Cleaner that will do “remediation” on clothes damaged by smoke and/or water.

RAF “lashed” out at Patronis

Floridians need all the Facts

NOTE #4: To its credit, at least RAF shares its membership list—unlike FLARS whose attorney told me it wouldn’t do so and worse, that it wouldn’t even reveal how many members it had.

NOTE #5: One organization dominant in the AOB reform effort is the Florida Chamber of Commerce via the Consumer Protection Coalition (CPC).   Under the “googled” definitions above, neither the Chamber or the CPC are “fronts” in my opinion.  The CPC is clearly identified as affiliated with the Chamber, and the Chamber represents thousands of businesses across Florida.  The CPC is clearly identified as a non-profit AOB reform “advocacy” group consisting of hundreds of thousands of individuals and businesses that are members of diverse trade organizations.  Many are insurer or insurance agent trade groups.   But, notable among the balance are those that represent the majority of business’s often aligned with the anti-AOB reformers like contractors, water firms, roofers, public adjusters and so forth.

The CPC’s diverse non-profit association members includes, for example: Associated Building Contractors, the Florida Bankers Association, The Florida Realtors Association, The Florida Retail Federation and a public adjuster organization called the Council of Property Claims Professionals, Inc (CPCPI).  Hardly insurer “lapdogs”.  There are also  private water firms who do not use AOB that are CPC members.  See the CPC’s press release regarding RAF’s Town Hall Meeting and whether it represents Florida’s restoration contractors.

Dave DeBlander sent me a response to my rebuttal of his op-ed which you can read here.

IMPORTANT:  If you enjoyed this post, you’re invited to subscribe for automatic notifications by going to: www.johnsonstrategiesllc.com.  Enter your email address where indicated.  If you’re already on the website at Johnson Strategies, LLC:  go to the home page and enter your email address on the right-hand side.  Remember, you’ll receive an email confirming your acceptance, so…check and clear your spam filter for notifications from Johnson Strategies, LLC.  ENJOY!