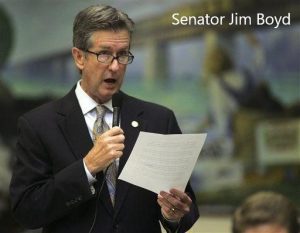 You can view the entire Senate B&I committee hearing and the debate on SB-76 beginning at the 5:33 mark here.  A parade of public presentations were delivered by trial lawyers and the customary advantage takers tendering an array of misleading anecdotes and distractions. “What’s wrong with doorknob hangers?” one asked. “Isn’t that just good marketing?”  Answer: good marketing should not include, promises of free roofs, no deductible insurance, blue tarps with no damage, unlicensed practice of public adjusting and inflated invoices.

Noteworthy was Senator Jim Boyd’s (R-Bradenton) aplomb and bipartisanship ushering a bill he sponsors out of a committee he chairs—and kudos to Senator Doug Broxson (R-Pensacola) for able assistance as Vice Chairman.  Thanks as well to all those on the committee who voted for the bill.

But some senators (at least three on this committee) are still missing the point. There’s no denying that Florida’s P&C Insurance Market is Spiraling Toward Collapse.  When insurers are losing money the law requires rates to be raised–this time on your constituents who long ago reached their tipping point.

SB-76, in my opinion, is precisely what Florida’s insane market needs. It limits the use of attorney fee multipliers to only rare and unusual circumstances (the Federal standard employed in every other state). It cracks down on the “free roof” scam by allowing ACV after 10 years. It creates a two-year statute of limitations (down from three) on claim filing and amends the one-way attorney fee statute similar to 2019’s successful AOB reforms.

SB-76 also contains a sensible roof reimbursement schedule calibrated for each category of roof. Tens of thousands of Floridians already reduce their premiums voluntarily opting for such a schedule.  SB-76 merely allows carriers to offer a roof replacement schedule at renewal without having to non-renew and issue a new policy with the same schedule.

I also find it hard to believe that even a trial lawyer would object to SB-76’s new claim reporting deadlines. It’s really just a simple requirement for prompt notification, which most consumers already provide–80% within 30 days of the loss. One of Florida’s largest carriers says that 97% of its claims are reported within one year.  In fact, SB-76’s two year statute of limitations is double that of Texas and California and four times the limit of 180 days in Louisiana.

There’s much more to SB-76 and much more work to be done before it becomes law.

For those who want to get involved in this important issue, go here and enter the necessary information for a letter to be sent to your legislator in support of SB-76 and HB-305.