You are here: Home / Advocacy / Collapse of an Evil Empire! PART VII—Market Impact
Share this article

The first culprit is reinsurance—it reimburses carriers for hurricane losses and can sometimes be as much as 60% of the total homeowners premium. The second culprit (the one that also makes reinsurance more costly) is frivolous, sometimes downright fraudulent litigation, proffered by a litany of complicit players, including public adjusters, roofers, rebuild contractors and dishonest attorneys.

A statement from the Consumer Protection Coalition’s (CPC) said the Strems disbarment trial pointed “…a glaring spotlight on systemic litigation abuses that Florida’s elected leaders must curb or eliminate to protect the public.” CPC appropriately stressed supporting documents showing that attorneys engage “…third parties, such as Public Adjusters or water mitigation firms, as insurance ‘consultants’ to troll for unsuspecting homeowners to sign up for remediation services.” (See NOTE #1 below)

It’s all consistent with the pages turned during the Strems trial. Not always from Strems (as the chart below shows) and perhaps not the same behavior as Strems, but… in too many instances Florida’s property litigation has run  astonishingly amuck! Thousands of shabby suits. Fraudulent claim inflation, billing fraud, and sometimes outright targeting of non-English speaking homeowners, or those in financial dire straits. It’s all incredibly bad–my opinion.

We’ll look at who’s doing what to whom later. First, let’s look at the market “impact.” (See NOTE #2 below)

It’s worth saying again… hurricanes generate the need for insurer’s to buy reinsurance. In the world’s most hurricane prone land mass, reinsurance is mandatory and the cost ranges from 40% to 60% (let’s say 50%) of the entire annual homeowners’ premium.  Often overlooked is that a portion of that cost, though difficult to quantify, is the result of activities similar to those of Strems and other firms.  On the non-cat side of the equation (the remaining 50%), fraud and litigation are not mere factors, they are predominant cost drivers.  And they are why many regard Florida’s property market as the most corrupt insurance system in America.

Due to these factors rate increases began to spike in 2014. Florida insurers saw a precipitous decline in profit of over $1 billion–$800 million in profits nosediving to $340 million in losses, in just five years. (See NOTE #3 below).

Today Florida’s property rates, already America’s highest, are rising again. To me, one of the most instructive high-profile rate request was that of Capital Preferred. In late 2019 it announced the need for a whopping  47% rate increase.  Later amended to 36.5% it still remained above the 15% threshold for a public hearing where CEO Jimmy Graganella stated under oath that the increase was due to three things: reinsurance costs, AOB abuse and 1st party lawsuits.  (See NOTE #4 below). Keep in mind our discussion here is that the first item,  reinsurance, is also impacted by the other two, litigation abuse due to AOB and 1st party lawsuits.

In fact, the testimony revealed that 36% of Capital Preferred’ s claims arrived via a lawsuit from an attorney, up from the previous of only 4%.  That’s an increase of 900% “…a massive number,” according to Graganella.

And get this. Most remarkably for the non-AOB suits, the irony of a homeowner needing legal representation before it’s physically possible to even know that it’s needed, fully escaped the hearing discussion. After all, when those claims were noticed to Capital Preferred, the homeowner didn’t know whether or not Capital Preferred would’ve been willing to pay them in full, maybe even be generous, to avoid the cost of litigation.

Of course, when a loss is paid in full, there’s no potential for an attorney windfall, which is the point.

And it’s the same with every other carrier.  Though many are asking for increases under 15 percent to avoid a public hearing others, like Capital Preferred, can’t survive at that level.  So, they asked for two annual rate increases under the 15% public hearing threshold for a total closer to 30%.  Others are making one annual request in excess of 20, sometimes 30 percent—most getting approved as is, or with only slight reductions.

This is why any home built in Southeast Florida before 2010 and worth less than $300,000 is insured in Florida’s high-risk pool, Citizens.  It’s that way in Orlando too.  It’s beginning to look like, nobody (nobody!) can find a private carrier willing to insure that particular risk configuration, (See Sun Sentinel).

Again, private market losses driven by frivolous lawsuits and massive fraud impacts both reinsurance and non-cat premiums. And it’s growing our market of last resort by leaps and bounds.

Reinsurance, of course, would’ve gone up anyway, but…not as much.  Non-cat losses wouldn’t have gone up at all, and Citizens data indicates many of its policyholders would have gotten a rate decrease, had it not been for excessive litigation.

For a closer look, delve into the following chart.  It shows the increasing number of lawsuits against property insurers by just the top 25 attorneys since 2015, (click here). It’s all public information compiled from the records of the Department of Financial Services (DFS). 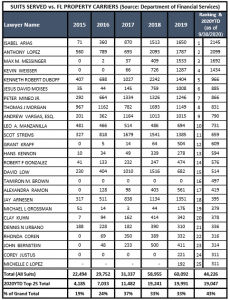 Look again, closely, and think of the Strems trial where ten thousandish suits were filed by just one firm over the course of ten years and according to sworn testimony from a sitting judge, the Rules of Professional Responsibility were violated in “…virtually every case where he and his firm enter an appearance.”

Yet, Strems isn’t at the top of this chart. In the far right column, (Ranking & 2020 YTD) he’s ranked number 11 with only 659 suits. Maybe he was preoccupied this year, I don’t know.  But look at who was ranked number one. Just through September 30 of this year Isabel Arias filed 2,145 suits against property insurers–300% more than Scot Strems during the same nine months.

She’s with the Cohen Law Group the head of which proclaimed himself the “Johnny Appleseed of AOB.”

Now look at the totals at the bottom of the chart. The number of  “All Suits”  has increased every year for the last five years and is on pace to grow again in 2020. The total number of suits during this time period, for just one line of business, is almost a quarter of a million suits (246,856 to be exact) filed against 56 property carriers.

The fact that 2,400 different lawyers sued 56 different property writers (see list) is not only incredible but, is testament that Florida does not need a “Fee Multiplier” to find attorneys willing to take on cases.

Finally, and again at the bottom of the chart, notice the percentage of suits filed by the top 25 attorney litigators.  For 2020 through September 30, it was 43% (almost half) of the total property lawsuits in Florida.

Of course, premium payers don’t care how we parse the lawsuits or divide their premiums.    They don’t care about our charts or even how many suits are frivolous or how much fraud there is. Maybe they should but, they don’t.

They just want their rates to go down.

Only lawmakers can cause that to happen. And while lawmakers can’t do anything about reinsurance or hurricanes they most definitely can do something to stop the fraud and litigation fundamental to the premiums of both.

Perhaps that will be the greatest legacy of the Strems episodes, a realization of how much Florida’s runaway fraud and litigation is costing the system and consequently how much  legislative inaction is costing consumers.

NOTE #2: In November of 2019 the Perryman Group released an assessment of excessive tort costs in Florida called “Economic Benefits of Tort Reform”.  According to the report litigation in Florida costs:

Perryman’s study examined all suits and is consistent with Florida’s status as the nations’ number one Judicial Hell Hole.

NOTE #3: Two sources:  Sun Sentinel article “Insurance Companies are set to squeeze even more money out of us” and an article for ARTEMIS (experts in Alternative Risk Transfer and Weather related funding mechanisms) by Steve Evans. The latter states reinsurance rates-on-line rose by an estimated 26% by the June 1 renewal season.  “Rates increases are actually now moving at their fastest pace since 2002 when the increases was 28%, the data shows.” See “Property cat reinsurance rates up 26% at June 1st.”

NOTE #4: CaseGlide released its September 2020 Claims Data Analysis revealing a total of 4,918 open litigated claims, an increase from August’s figure of 4,590 (+7%), and up 28% from September 2019 figures (3,853).   It also reported a steady decline in the percentage of Assignment of Benefits (AOB) cases in the last 12 months.  September had 20% of open cases involving AOBs vs last September at 36% of open cases.