Some say every insurance crisis inevitably traces back to a handful of lawyers and that abuse of Assignment of Benefits (AOB) is no exception. What I’ve recently uncovered seems to bear this out in mind-boggling terms.

Just like PIP and sinkholes, AOB has all the markings of just another sue-for-profit scheme. (See “What is an Assignment of Benefits” here).

During a recent House Banking and Insurance Subcommittee workshop trial lawyers and water extractors questioned whether AOB is even a crisis. Little was said about finding the root cause. They blamed a few bad apples; water extraction companies and roofers. And, of course, they blamed insurers, alleging they don’t pay their bills.

As it turns out, insurers are paying their bills–even the whoppers they get from AOB attorneys. And, this may drive costs even more than the fraudulent claim inflation from roofers and water extractors. (See “Water Extraction…Florida’s biggest cost driver?!” here.)

Here’s the thing. I’ve been told “property” insurer’s routinely pay attorney fees to settle AOB suits for somewhere between $3500 to $7500. Don’t know if that’s “on average” or even if it’s true, but…it sounds reasonable. Heck, at $400 an hour, it’s barely more than one day’s work.

Well, guess how many AOB lawsuits (for  all lines) have been filed against insurers in just the last two years–go ahead guess!

I swear I’m not making this up…92,521 AOB lawsuits in just the last two calendar years, for businesses mostly; not consumers.

Check out the following chart showing how the “daily” total has climbed to nearly 200 lawsuits every working day since 2004 when AOB lawsuits were virtually unheard of. 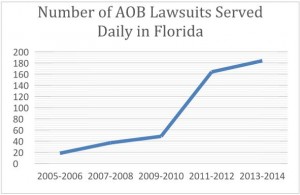 Funny, emergency contractors claim they need AOB to get paid. But, in the wake of the 04/05 seasons, after eight storms in sixteen months, they didn’t seem to need AOB at all. This jives perfectly with testimony from roofers that only bad apples use AOB and it should be abolished altogether. (See “AOB & Roofers?!” here.)

While abusers will always find a way to blame insurers, it’s hard to ignore the names and numbers from the Department of Financial Services (DFS).  Every suit filed against an insurer is in a DFS data base (available online) that can be queried any number of ways, including: by insurer, by plaintiff, by time period, and best of all, by assignee. (See NOTE #2 below).

It’s all public information. Anyone can enter any AOB lawyers name and see what pops up. Since he testified at the House insurance workshop for trial lawyers, I entered the name Lee Jacobson with Hale, Hale & Jacobson and got a 99 page report listing 1,383 AOB lawsuits.

To me it seems like trial lawyers talk a lot about how much they help consumers.

Not so much with AOB.

Rarely is the beneficiary an individual consumer. AOB is overwhelmingly used as a tool to increase profits of “for-profit” enterprises–at least according to the data.

I could go on and on, searching more names and businesses, but you get the point.

Please note: I want to be fair to all sides here and am willing to print any response from anyone. But…based on the DFS data,  AOB smells like a massive lawsuit scheme,  benefitting only a few dozen lawyers and businesses.

The cost implications of more than 50,000 annual lawsuits has got to be ginormous, so… I really hope I’m wrong.

But, the most offensive thing to me isn’t the number of suits, or whose filing them, or even why.

It’s the impact this must be having on consumer premiums and a nagging, almost inescapable notion in the back of my mind, that it may all be just the tip of an ugly iceberg!

Be sure to read my next report focusing exclusively on how the AOB scheme drives up property insurance premiums.

NOTE #2: DFS is the statutorily registered agent for service of process to insurance companies. Pursuant to Ch 48.151(1), FS; all authorized insurers are required to designate the Chief Financial Officer of Florida as their Statutory Registered Agent for Service of Process.  The figure 92,521 AOB lawsuits was extracted from the DFS Service of Process (SOP) database. I tried to download the whole list but, it’s over 6,000 pages long. Don’t trust me–view it yourself by going to the DFS Service or Process search page and, under the words “Detail Report Selection Criteria” make only two entries as follows: 1) in the “Date From” field enter 01/01/31 and in the “Date To” field enter 12/31/14. Then, in the “Plaintiff Name” field enter only A/A/O which means “as assignee of”. The number of suits listed (92,521) is likely low because cases that may have only the name of the assignee without AAO do not appear.