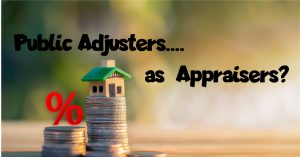 You may remember my opinion about public adjusters who are paid a percentage of a claim also being allowed to act as “disinterested” appraisers under a policy’s appraisal clause. In June of 2020 I published an article (one which you should read titled Public Adjusters—How Interested are the Disinterested?) in which I said the practice may be on its way out.

The specific question had been referred to Florida’s supreme court in State Farm vs. Sanders (See NOTE #1 below) and I and many others opined the chances were high the practice would be prohibited going forward.  In summary there were (are) two basic issues:

My opinion (then and now) is that a PA acting as an appraiser for his client is hired to judge whether or not he’s done a good job—essentially ruling on the accuracy of his own work product. Ridiculous, but permissible unless the supreme court puts a stop to it, I said.

Now, if that PA is also paid on a contingency fee basis (which, in my experience, they always are) then, he/she is also further incentivized to approve of their own work product, (instead of a truly“ disinterested” person) and even their original estimate is likely to be higher as a result. (See NOTE #2 below)

Those on the other side argue that the insurer’s disinterested appraiser is incentivized to understate the value in order to keep getting referrals from the insurer. And that the umpire agreed upon by each side resolves any issue of bias from either side.

Now, one year later, after the case had been fully briefed by the parties, and numerous industry organizations had filed briefs as “Friends of the Court”, and the attorneys presented oral arguments before a panel of six of the seven Florida Supreme Court judges, the Florida Supreme Court unanimously decided not to review the case.

Whatever the reasoning, the impact is to leave in place a conflict between two DCA’s. In the 5th and 4th DCA (and now also in the 2nd DCA), an insured’s public adjuster working on a contingency fee cannot serve as a “disinterested” appraiser. In the 3rd DCA he/she could serve as a “disinterested” appraiser, provided the financial relationship is disclosed.

It’s possible the justices didn’t consider the case to be in the correct procedural posture for its review, or it thought the facts in the Sanders case did not directly conflict with the other DCA’s or that the issue was not of great public importance.  The decision was cryptic enough that no one really seems to know the real reason.

Disappointing for sure, but…it’s the way it is, at least for now.

For those with additional questions, particularly on the impact, I highly recommend you read an article by Amy Koltnow and Michael Billmeier with the Colodny Fass Law firm titled: “Interested To Know Whether A Contingency Fee Public Adjuster Can serve As A ‘Disinterested’ Appraiser?”

NOTE #2: Sometimes the appraisal clause uses the word “independent” instead of “disinterested” and the meaning can be interpreted differently than State Farm’s policy which uses “disinterested.”  Either way, the trend in Florida cases is clearly moving towards no appraisers being previously retained as public adjusters whether or not hired on a contingency fee basis.  See “Can PA’s on Contingency Fee Act as the Appraiser?”  by Chip Merlin, April 16, 2020