You are here: Home / Advocacy / Attention Florida Lawmakers–PART I
Share this article

Lawmakers just got back in town–hopefully they’ll devote necessary time to triage Florida’s immobilized property market. Such should include some badly needed new approaches as well as cauterizing past reform efforts, 2019’s HB 7065 and 2021’s SB-76.

Since last year’s session, litigation has only tightened its strangle hold on Florida’s property system–fueling speculation that our insurance market is being (has been) displaced by a $4.5 billion litigation market. Last year OIR announced that Florida, with only 8% of America’s property claims, had 76% of America’s property lawsuits. The data from NAIC (National Association of Insurance Commissioners) was irrefutable and, in my opinion, proves that litigation syndicates consisting of plaintiff firms and 3rd party vendors are perverting the system in their favor…at the expense of clients they purport to serve.

“Life support” is the term Citizens President Barry Gilway used to describe Florida’s residential insurance market. He told the Senate Banking and Insurance Committee “in 2020 only a handful of Florida’s 52 private insurance companies made a profit…and…net losses for the group exceeded $828 million.”

Commissioner Altmaier and Insurance Consumer Advocate (ICA) Tasha Carter used the term “dire” to describe 2021 results.   Check out the sea of red on the 2021 third quarter financials.  Below are some of those with the highest losses. 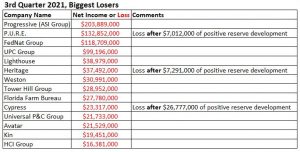 The neon light of the private market’s failure is the population of Citizens. In January 2020, Florida’s insurer of last resort covered 444,000 policies with $112 billion in insured exposure. Citizens now covers about 715,000 policies with $200 billion in exposure and is expected to top 1 million policies by the end of 2022.

Litigation is the culprit (See NOTE #1 below). As a first step lawmakers must put a stop to roofer solicitations conducted in cahoots with trial lawyers.

Last year’s SB-76 included a requirement for plaintiffs to file a Notice of Intent to Litigate (NOITL) which, among other things, gives insurers an opportunity to rectify a dispute before incurring huge attorney fees on a claim it was willing to pay.  It also addresses the problem of the insurers First Notice of Loss (FNOL) being the notice of a lawsuit.

Review Guy Carpenter’s report on 4th Quarter 2021 NOITL’s and check out the chart titled, Suits Served by Attorney (p.12).  At the top is Isabel Arias.  She’s with the Cohen Law Group, run by the self-described Johnny Appleseed of AOB, Harvey Cohen. Note: she filed 1,220 Notices of Intent to Litigate in just one quarter.

Stop and think. That’s a pace of 4,880 suits per year, from just one lawyer. Compare that to the other 49 states who average only 730 such suits for all lawyers  FOR AN ENTIRE YEAR!!!

Some ask how it’s even possible for one firm/attorney to have that many claims with the potential to generate that many suits. That’s Florida’s current reality in my opinion.  Roofers (mostly) and others whose contracts are titled “This is not an Assignment of Benefits” are working around the reforms.

In his Sun Sentinel article Ron Hurtibise quotes an email from Insurance Consumer Advocate, Tasha Carter saying she “…has spoken with numerous consumers who were left unprotected after signing Direction to Pay agreements. Some allow contractors to assess fees to consumers who terminate their contracts.”

Say what you want, but…roofers and other 3rd party contractors are scamming the system to continue employing the practices otherwise prohibited in the 2019 (and SB-76) reforms.

Though these new “Direction to Pay” contracts specifically state the consumer is not signing over benefits of their insurance policies, according to ICA Carter they still allow… “a contractor to exercise control over a consumer’s insurance claim, often to the detriment of the consumer.”

Meanwhile there is still an injunction against enforcing the soliciting practices prohibited by SB-76; the result of an action filed by Gale Force Roofing.  There is also a separate lawsuit attempting to overturn the entire act on constitutional grounds filed by RAF.  (See NOTE#2 below)

Carter wants to extend the 2019 AOB consumer protections to Direction to Pay agreements and related contracts. Her proposal, best of all, includes a requirement that insurers send payments directly to the policyholder rather than the contractor. (See NOTE #3 below)

Lawmakers should study ICA Carter’s plan and DBPR’s responses to the various suits. They should heed the warnings of knowledgeable regulators promising “dire” consequences in the absence of further reforms.  They should listen, learn and legislate a solution to run away litigation before it’s too late.

NOTE #1: There are other cost drivers, but…litigation makes them all worse. The weather (which the legislature can’t do anything about) is one. In 2015 there were two weather events that hit our Florida insurers. That increased to 7 in 2016, increased to 8 in 2017, increased to 9 in 2018, increased to 12 in 2019, and exploded to 19 in 2020. These weather events brought out the PA’s, roofers and lawyers.  I have no proof but, carriers tell me that in 2021 many of the “storm chasers” went to Louisiana, Texas, and Kentucky where the hunting was a lot better.  The other driver is reinsurance which continues to go up but, again…litigation is a factor in reinsurance rates as well.

NOTE #2: In late August, DBPR filed its response to the suit, denying the allegations but claiming an affirmative defense of “Unclean Hands.” This, because Gale Force, in its own filing, “represented to Florida homeowners or induced Florida homeowners into believing that the Plaintiff served as a ‘public adjuster,’ as defined in section 626.854(1) of the Florida Statutes.”

From LMA Newsletter (9-20-21), The Restoration Association of Florida, filed a lawsuit in U.S. District Court for the Northern District of Florida against DBPR and Daniel Biggins, the executive director of the Construction Industry Licensing Board.  It claims the law impinges on protected free-speech rights, interferes with contract law and commerce, and due process.  The group has requested a preliminary injunction against the law’s enforcement.   See this response to the RAF Complaint from DBPR and ruling Denying Injunction and Granting Preliminary Motion To Dismiss.

NOTE #3: This is something I’ve been advocating for Public Adjusters (PA’s) for years. For PA’s it’s a means to keep the consumer informed on their claim and give them the ability to hold PA’s accountable for the work they did, or maybe didn’t, do.  For roofers it puts the consumer back in charge of their own claim.  This, I believe, would also somewhat defeat the impact global settlements have on unsavory solicitation practices.