You are here: Home / Advocacy / Public Adjusting– NO LICENSE?
Share this article 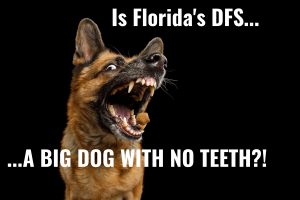 Next, don’t let the title or the startling image above mislead–this is not a critique of Florida’s Department of Financial Services (DFS).  To the contrary, it’s meant to answer the question I am persistently asked…“Why doesn’t DFS stop all the illegal claim solicitations?” Answer: it hasn’t been given the authority needed to do so–which is a legislative failing.

Unlike PART I, where we explored the “trickle-down” moral hazard created by attorney fees, here we’re examining one of the more pronounced and, I’m sad to say, slippery, regulatory challenges… preventing the Unlicensed Practice of Public Adjusting or UPPA.

Public Adjusters hate UPPA.   We should all hate UPPA.

After all, it’s the foundation for the confetti of flyers, yard signs, doorknob hangers and door-to-door solicitation scams that too often involve the breaking of numerous laws, especially ones requiring those who act like public adjusters to be licensed as public adjusters (PA’s).

These so called grey areas are currently clarified in HB-717 and its just released Senate companion, SB-1598.  That’s good. However, what’s still not addressed is what specific authority DFS may need to levy fines on the unlicensed roofers, water mitigation firms, contractors, and others who “…act on behalf of or aid an insured” without a license as a public adjuster.

Example: The Maryland Insurance Administration (MIA) just issued fines of more than $500,000 to five individuals and four companies (roofers, contractors & PA posers) for “Fraud” and for “…acting as public adjusters without a license..”  (See NOTE #2 below)

“… while most home repair and restoration services are honest and reliable, there are dishonest and predatory actors that lure homeowners into unnecessary or inflated repairs by suggesting that those repairs are covered by insurance, and then offer to act for the homeowner in negotiations with the insurer in violation of state licensing laws and often to the detriment of the consumer. Reports of these activities often follow disasters or storms and have certainly spiked during the pandemic.”

That’s the point, isn’t it?  They “…lure homeowners.” In other words it’s a trap.

What would Florida look like if we could eliminate this trap?

One of the Maryland alleged culprits was found to have faced “…administrative action in other states for similar activities.”  And, just like Florida, one company was allegedly eliminating deductibles by paying the homeowner an equal amount for placing a “free roof” sign in their front yard.

Another roofer was fined when video evidence showed him on a roof intentionally damaging shingles to support the claim he was planning to file.

Sounds like the opening chapter to a Florida hurricane novel: “..dishonest or predatory actors that lure homeowners into unnecessary or inflated repairs…”

HB-717 and SB-1598, contain good language making it clear that those who solicit claims and/or publicly adjust without a license are breaking the law, however, DFS still needs direct statutory authority to levy fines. Those who do not pay their fines or who assist those who are unlicensed in continuing to break the law should have other licenses they might hold (contracting, roofing, etc.) subject to suspension or permanent revocation as well.

Somehow these sentiments need to find their way into Florida statutes via one of the many property reform bills now circulating. Seems like the industry and the regulator could get together on this one issue.

NOTE # 1: Fs-626.854 (19); Except as otherwise provided in this chapter, no person, except an attorney at law or a public adjuster, may for money, commission, or any other thing of value, directly or indirectly:

(a)Prepare, complete, or file an insurance claim for an insured or a third-party claimant;

(b)Act on behalf of or aid an insured or a third-party claimant in negotiating for or effecting the settlement of a claim for loss or damage covered by an insurance contract;

(c)Advertise for employment as a public adjuster; or

(d)Solicit, investigate, or adjust a claim on behalf of a public adjuster, an insured, or a third-party claimant.